Trap at the No Sleep Festival: Grše, Banfica, and Kali Are Coming to Drugstore! 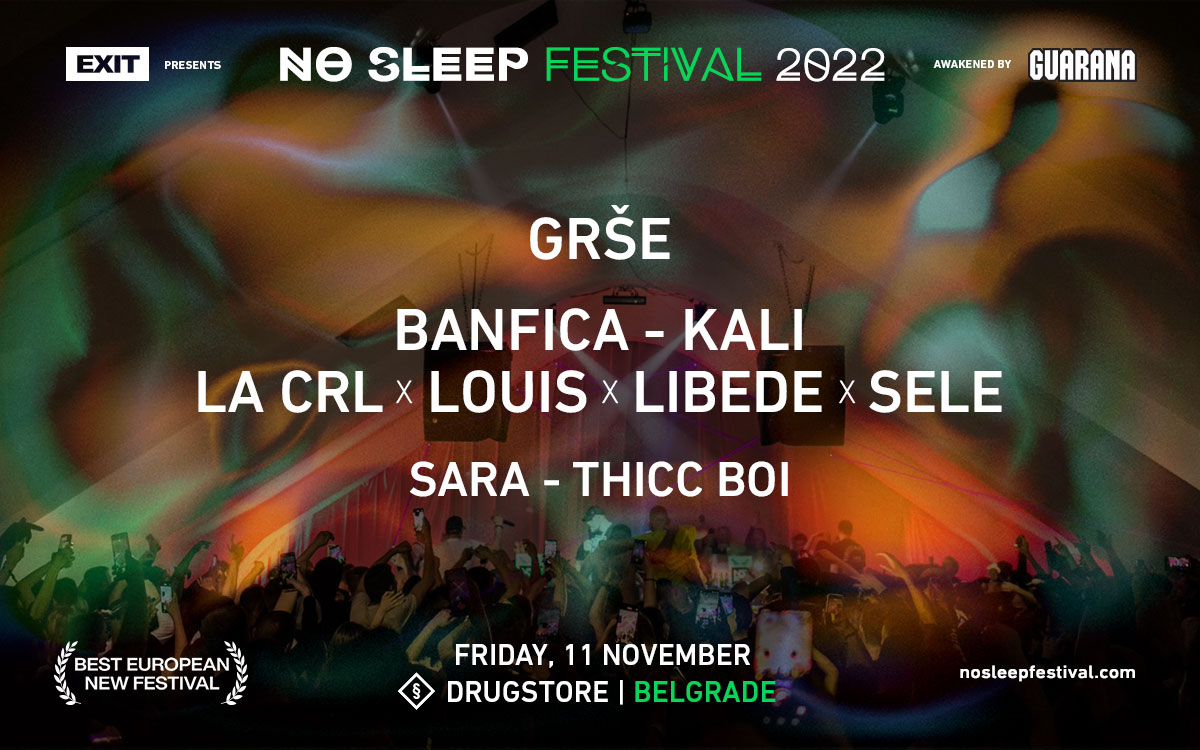 Home » News » Trap at the No Sleep Festival: Grše, Banfica, and Kali Are Coming to Drugstore!

On the first night of the No Sleep festival, Friday, November 11th, the Belgrade club Drugstore will shake to the sounds of trap, drill, r’n’b, brought by Grše, Banfica, Kali, La Crl x Louis x Libede x Sele, Thicc Boi, and Sara. The young and fresh local and regional performers counting millions of views on streaming platforms and selling out clubs throughout the region, have become an indispensable part of the No Sleep festival. The young trap crew also re-affirms the diversity of the line-up at the No Sleep festival, which already features big stars of the electronic scene, such as Amelie Lens, Reinier Zonneveld live, Regal, Partiboi69, Ida Engberg, and Indira Paganotto!

Grše came onto the scene, guns blazing. The song from his debut album, „Badr Hari”, made in honour of the famous kickboxer, secured Grše’s place among the best rappers in the region. Today, three years on, that song is still his most recognisable track, with over seven million views. His career exploded quickly, and Grše made his way to the very top of the regional hip-hop scene. His first album presented his hard-edged style and uncompromising sound, while his second album, „Platinum”, surpassed all expectations, so it was soon apparent that „Tilirijum” was more than just beginner’s luck.

Although they deliver entirely different sounds, Banfica and Kali will both represent the same house, the Balkaton Gang crew. Their new collaboration, “U Getu”, has proven how good it is when complete opposites combine.

Banfica is one of the pioneers of the Balkan drill scene. This young producer and rapper from Varaždin chose this pseudonym because it is the name of the neighbourhood where he grew up and where he finds inspiration for all his work. His music weaves narratives about life and coming of age, and all his stories begin and end with Banfica. His extremely specific image raises the question of who really is behind the beats and why he is hiding. He got the inspiration for the Banfica mask from the fashion designer Maison Margiela, wanting to separate his art from everything else. As he says, as long as he makes music – the mask will not fall.  After all, the audience does not need more than the sense of hearing for hits like „Geto sport”, „Jamie Vardy”, „Tech Fleece”, and „Omen”.

What’s known in Hollywood as a triple threat – that’s Kali on the local music scene. She is a complete educated musical artist. She composes, writes lyrics, plays, sings, and brings a new wave of R’n’B, Latino, and Yugo-nostalgic rock, with her own twist. The key to her music, especially her lyrics, is multi-layeredness, so she plays just as well with melodic lines as with the secondary meanings of all her verses. So far, her career has been marked by collaborations with Rasta, Corona, Banfica, and Pajak, and hits like „Poslednji ples”, „Kiše svilene”, „Tebe nema”, and „Crna magija”, open a portal to a unique musical experience.

On November 11th and 12th, No Sleep Festival’s Main Hangar will host this generation’s most sought-after techno stars, attendance record holders Amelie Lens and Reinier Zonneveld, while the Spanish psy-trance-techno star Indira Paganotto and Australian showman Partiboi69 will make their Belgrade debuts! During the sleepless weekend in the Hangar, they will be joined by Regal,  Koboyo, Kiki Solvej, DJ Jock, Edib D, and Katalina.

The official after-parties at the Drugstore club are headlined by the universally acclaimed Swedish activist and DJ with a refined sound Ida Engberg and Italian rising star Matisa, as well as the German DJ and EXIT ambassador Human Rias, regional and local audience favourite Dejan Milićević, one of the founders of the Bosnian-Herzegovinian club scene Andrej Jelić and a representative of the Belgrade scene Antrax. The second day of the festival at the Drugstore club will be marked by the WB Community party, hosted by DJ King of the Clouds.

The Belgrade Silos, which will be connected via a pedestrian path to the Hangar this year, will feature the Ukrainian minimal heroine Olga Korol, the Art Director of the Milanese club Tunnel DJ Bugsy, the Strasbourg DJ Pascal Walter, the Swede Maria Nordgren and the Ukrainian Masha, along with the well-known Belgrade artist Doo. Soon we will announce the entire program for the other Belgrade clubs in which the spirit of the No Sleep festival will reign!

Standard festival tickets are on sale for RSD2,290, with a 40% discount, while VIP GOLD tickets cost RSD3,990. Standard one-day tickets can be purchased at a gift price of RSD1,590, offering a saving of 40%, while the price of a one-day VIP GOLD ticket is RSD2,790. Tickets for the Drugstore club and the afterparties are available at RSD690. Due to overwhelming interest and demand, current ticket prices will be valid no later than Friday, October 28th, or until the limited contingent is sold out.

Tickets are available here,  as well as through the Gigs Tix sales network, online and at sales locations.