Amsterdam Dance Event Headliner Coming to No Sleep: Reinier Zonneveld in Belgrade for the First Time! Partiboi69 and Regal Joining the Lineup! 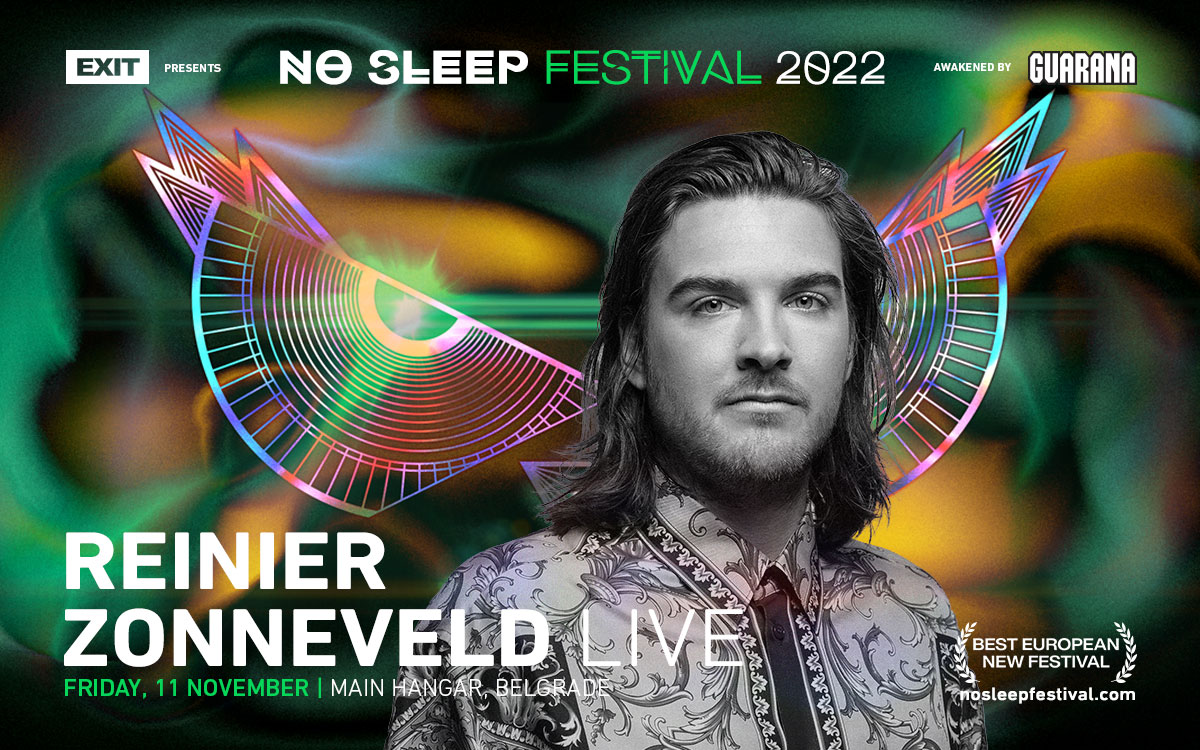 The most sought-after techno star of the new generation, Reinier Zonneveld, known for his unreal live sets and sold-out performances worldwide, is coming to his first Belgrade performance on Friday, November 11, as part of the No Sleep Festival! During last year’s Amsterdam Dance Event, he broke a record at Awakenings, the biggest techno solo event in history, with 13,000 tickets sold in less than three hours, surpassing electronic music giants such as Paul Kalkbrenner, Maceo Plex, and Tale of Us, but also other global superstars such as Adelle, U2, Metallica, and Lady Gaga, who previously performed at the same venue! His meteoric success did not go unnoticed by the king of electronic music, Carl Cox, so this year they will co-headline the sold-out Awakenings party at the world’s largest electronic music festival in Amsterdam.

The unique Partiboi69, who set the world alight with his fantastic mixes and created a unique community within electronic music, will also have his first exclusive performance in Serbia on Friday, November 11th! After six years, the techno maestro from Madrid – Regal – is also returning to Belgrade! They are accompanied by the Dutch DJ Kiki Solvej and an upcoming star from Novi Sad, Katalina, who complete the programme in the Main Hangar of the Port of Belgrade on the first night of the festival. They join a No Sleep line-up that includes superstars Amelie Lens, Indira Paganotto, and Parisian techno artist Koboyo. Soon, we will announce the names of more acts that will perform during 48 sleepless hours on November 11th and 12th at numerous locations throughout Belgrade. Single-Event No Sleep tickets go on sale on Friday, October 14th at noon, at the best starting price of RSD1,290. This first batch of tickets is expected to sell out in hours!

Reinier Zonneveld has taken the world by storm with his extraordinary music skills and live performances in which he plays some of the most amazing techno tracks, which have redefined the potential of the entire genre in recent years! From marathon eight-hour sets to performances at all the world’s leading festivals, including a premiere set at Exit’s Dance Arena, Reinier has become the absolute headliner of major electronic events such as Awakenings and Time Warp. He has also launched his own LiveNOW Festival in Amsterdam, where he delivered a masterful 11-hour-long performance! He founded Filth On Acid, the leading label on Beatport and one of the best-selling and most highly acclaimed labels on the electronic music scene. In addition to bangers such as „Move Your Body To The Beat“ and „Things We Might Have Said, “the latest release in Reinier’s discography is the track „Fist On Acid“ with Angerfist, while he has announced a lot of new music for the upcoming period. Knowing Reinier and his habit of sneaking exclusive unreleased material into his sets, No Sleep Festival will be the perfect opportunity to preview what’s to come!

The Australian showman Partiboi69 has held the status of the fan-favourite “people’s raver,” combining top-notch music and humour in a completely uncompromising way! Through his live performances and labels Mutual Pleasure Records and Stingboi Productions, he combines computer-animated graphics and green screen art with ghetto house, Miami bass, electro and Detroit techno. This combination has enabled him to create one of the largest online communities in electronic music. Performing with his now iconic curved sunglasses, he quickly turned into one of the most exciting phenomena in the DJing world, and the most authentic examples of the music opus of this eccentric raver can be seen in tracks such as „Freaky Dreamz, “Magnificent“ and „Freaking You Out“. Partiboi69 has practically built a cult of personality in recent years, and the famous 2018 Live Ghetto House/Ghetto Tech Mix stands out as mandatory audio-visual material before his debut performance in Serbia at the No Sleep Festival.

The master producer/DJ Regal comes to No Sleep from Madrid after a series of releases for labels such as Figure, Bpitch and Exhale, and his internationally acclaimed label Involve. In recent years, he has established himself as one of the most sought-after techno talents on the electronic-music scene. He has remixed Nina Kraviz, Ellen Allien, and Emmanuel Top and collaborated with artists such as Len Faki (EP „The End“), Alien Rain (EP „Acid Affair“) and Amelie Lens, while he has carved his name into the global techno scene with two major Boiler Room sets and performances at Berghain, Awakenings, DGTL and Exhale. Known for his ability to move between different subgenres, he brings an eclectic style to the No Sleep festival on Friday, November 11th, drawing roots from different corners of electronic music with hints of trance and acid.

The first day of the festival will also include Kiki Solvej, who arrives from Germany, where she took a promising starting position on Zonneveld’s Filth on Acid label at the end of last year. She debuted with an excellent couple of tracks,  „Deutsches Rave Mädchen“ and „Heute Nacht“, in which she presents a strong techno sound, industrial textures and laser synthesisers accompanied by her vocals. Local support in the Main Hangar on November 11th will be provided by Katalina, a young DJ and resident of No Sleep Festival and Exit’s No Sleep Novi Sad stage, who brings house and techno, energetic rhythms, cross-genre sets and positive energy. She is the winner of the first Let’s Mix It DJ competition, and in addition to Exit, she has performed in numerous Novi Sad and Belgrade clubs.

Regular festival tickets are on sale for RSD2,290, with a 40% discount, while VIP GOLD festival tickets are on sale for RSD3,990. The sale of regular Single-Event tickets will begin on Friday, October 14th at noon at a 50% discount and a gift price of RSD1,290, while the cost of Single-Event VIP GOLD tickets will be RSD2,490. Tickets are available here and via the Gigs Tix sales network, online and at points of sale.