EXIT Rounds off No Sleep Festival! Techno Superstar Stephan Bodzin Is Coming to Belgrade, Along With 20 Other Newly Announced Performers! 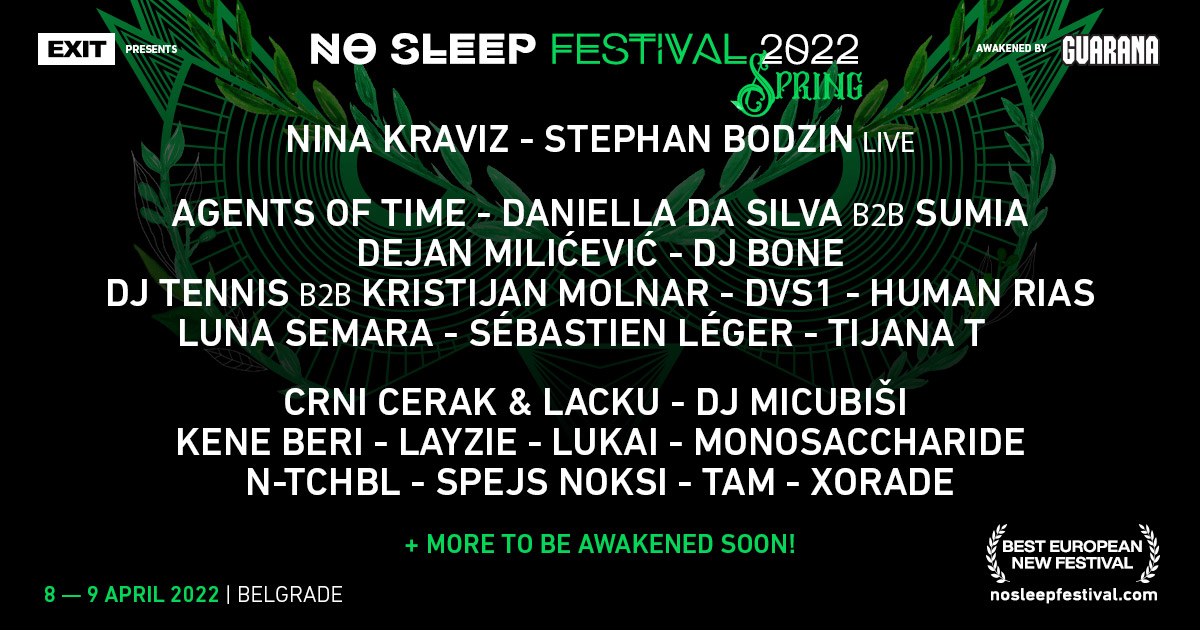 Home » News » EXIT Rounds off No Sleep Festival! Techno Superstar Stephan Bodzin Is Coming to Belgrade, Along With 20 Other Newly Announced Performers!

Techno superstar Stephan Bodzin joins the previously announced Nina Kraviz on the No Sleep festival lineup, bringing a high-production-value two-hour live performance like we have never seen before. The announcement includes 20 other new names. Officially the Best New European Festival, which will take over the Matrez hangar of the Port of Belgrade, will also feature the much-sought-after Italian duo Agents Of Time, the universally beloved DJ Tennis, Portuguese rising star Luna Semara, talented Progresivna Suza resident Lukai, and our internationally acclaimed DJs Tijana T and Kristijan Molnar, who will stand side-by-side with previously announced techno legends such as DVS1 and DJ Bone!

The line-up of the Belgrade club Drugstore has also been completed, and it includes French progressive house champion Sébastien Léger, Daniella Da Silva, Human Rias, local veterans Dejan Milićević, N-Tchbl, and DJ duo Monosaccharide. The trap party is sure to be sold out this year because Crni Cerak & Lacku, Spejs Noksi, Kene Beri, tam, Rade XO and DJ Micubiši are all coming! The current price for a standard two-day ticket will be valid no later than end-of-day 10th March or earlier if the limited quantities are sold out.

Stephan Bodzin has reaffirmed his techno-superstar status with his new album Boavista! Inspired by his recent relocation to Portugal, the German maestro used his trademark analogue synthesisers and rhythm machines to produce a piece of studio magic that the global stage has been waiting on for six years! Hence, the reactions from the audience and the media are no surprise, already declaring it the album of the year. The universal love for Bodzin was crowned by an additional, double edition of remixes signed by the entire global A-list, such as Solomun, Boris Brejcha, Maceo Plex, Hernan Cattaneo, rising stars Anfisa Letyago, Reiner Zonneveld, Luna Semara, and many others.

Agents Of Time, the Italian duo that reigns over melodic techno at the moment, will perform on the same evening. From their debut “Polina“ in 2014 until today, they have grown into genre leaders along with Tale of Us and ARTBAT. Their new “Mirage EP” on the ultra-popular Afterlife label is already running for Release of the Year for 2022.

DJ Tennis, the absolute legend of the global scene and the proud owner of the beloved label Life & Death, is in charge of the grand finale in the Port of Belgrade this year. He will be joined at the DJ desk by a leader of the local scene, Kristijan Molnar, to complete the celebration of the Best New European Festival title, which No Sleep Festival won just before the start of the two-year hiatus caused by the pandemic.

Drugstore: From Trap to Techno

The iconic Belgrade club Drugstore brings the most diverse line-up so far to this year’s No Sleep, most notably featuring the famous Sébastien Léger.

Friday, 8th April at Drugstore will be dedicated to hip hop, trap, and techno. The first part of the evening will feature the performances of the local underground trap scene representatives — Crni Cerak and the producer and rapper Lacku. They will be followed by the shining stars of the new underground hip hop and trap scene, the energetic Spejs Noksi and Kene Beri, a rising pop star and talented singer-songwriter representing the voice of the new generation tam, while the roof will be raised by DJs Micubiši and Xoxo Rade. Techno will take over the dancefloor at the official afterparty, spearheaded by Human Rias, resident and booker of the legendary Munich club MMA, representative of the Berlin underground scene Daniella Da Silva in a joint performance with talented DJ SUMAI bringing the sounds of the Istanbul techno scene. The Belgrade Monosaccharide will close the first sleepless night with dark, futuristic acid techno.

The first part of the second night, 9th April, is reserved for the Euphoria party, named after the ultra-popular TV series. The official afterparty will be opened by N-tchbl (Marija Nikolić), a representative of the local progressive electronic scene and a resident at Frisky radio. A finish befitting the celebratory edition of the festival will be delivered by no less than Sébastien Léger, a French DJ and producer who will bring an upbeat house sound to the festival. His hit singles “Hit Girl“, “Hypnotized“, and “Aqualight“ are still played in clubs throughout Europe, and his track “Lanarka“ was at the top of the Beatport list in 2019. He says that he has lately “made five years’ worth of music,” some of which he published as a continuation of All Day I Dream and Lost Miracle. No Sleep will be closed by one of the best DJs and producers in the region, with a career spanning two decades, Dejan Milićević.

The spring edition of the festival, produced by the EXIT team and supported by the domestic brand Guarana, occupies a special place on the local and regional music scene, as well as in the hearts of electronic music fans everywhere, as it finally offers a chance to celebrate the prestigious title of Best New Festival, awarded in 2020!

The current promotional price of a standard two-day ticket for No Sleep Festival 2022 — 2,290 RSD at a 40% discount — will be valid until the end-of-day Thursday, 10th March, or earlier if the stock is sold out. The inventory of two-day VIP tickets, at 4,490 RSD and a 20% discount, will be sold out soon.

Tickets can be purchased through the No Sleep Festival website, via Gigs Tix online, and at physical locations.

Anti-pandemic-related conditions for entering the Matrez hangar and the Drugstore club will be announced before the festival.