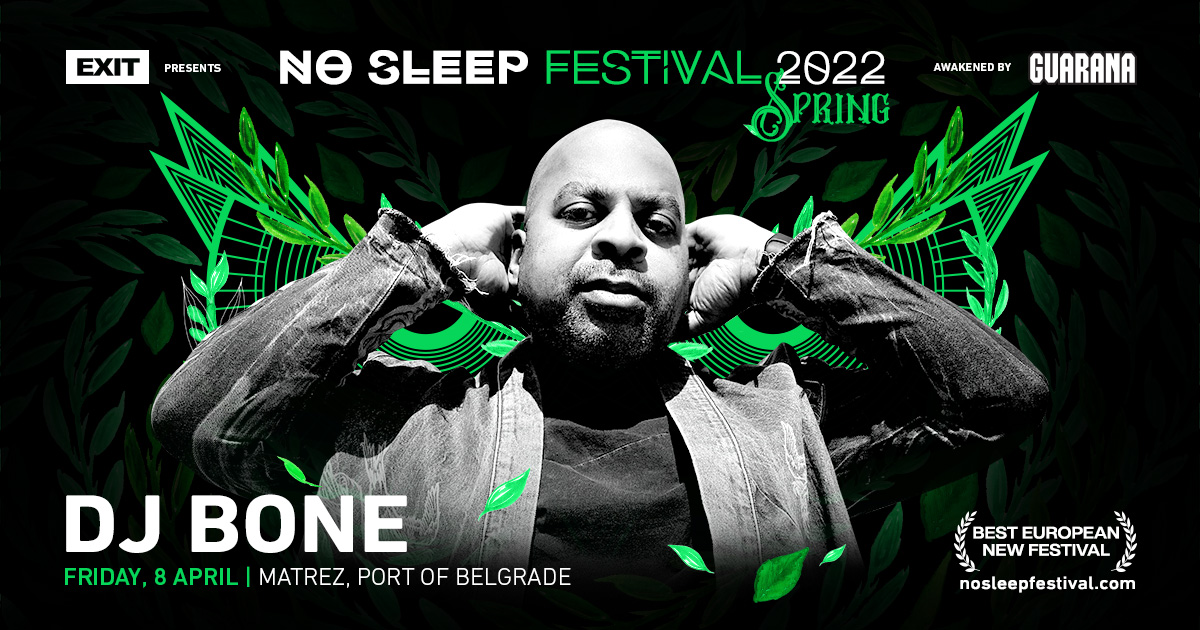 Over the nearly three decades of his career, DJ Bone has been through hip-hop, funk, techno, house, and all the other related genres, and his sets carry all of these musical influences to this day, so you should not be surprised to hear Outkast after Moodymann, or vice-versa, in his set. From his first encounter with Detroit techno on local radio, through club parties that he had to “crash” as a teenager, to a vinyl collection worth thousands of dollars, he chose a path on which he remained true to himself, his city, and the underground.

As one of the most highly respected artists from the very source of the “underground scene,” Bone brings the foundation of the Detroit sound to the spring edition of the No Sleep Festival. In anticipation of his first performance in Serbia, we present five reasons you should not miss the opportunity to hear him live.

There are many reasons we can call DJ Bone the main artery and pulse of this genre without exaggeration. He lives in the capital of techno runs his own publishing house called Subject Detroit (and another one called Encounter). He is a resident at leading clubs and creates music inspired by the city he lives in. His first encounter with the famous Music Institute and techno pioneers such as Electrifyin’ Mojo, The Wizard, D-Wynn, and Mayday in the early 1990s, defined his life path, career, and musical influences. His performances at The Love Club won over local audiences and soon turned DJ-ing into his regular (nocturnal) nine to five – at the very beginning of his career, he was a resident at three different clubs, five nights a week. As that was still not taking full advantage of his capacity, he started the show Deep Space on the local radio station, playing fortnightly nocturnal live sets.

From the mid-1990s until today, DJ Bone has remained faithful to his Detroit techno soul music roots, which he integrated as a mantra into his 2008 single “No Sleep (True to da Roots)“. He performed at prestigious electronic music festivals such as Dekmantel, Movement, and Freerotation, gathering prominent representatives of the electronic music scene on both sides of the DJ desk, but he made compromises at no point in his career. He became an urban legend for rejecting offers from major publishers and music agents countless times.

“All these labels would just break an artist. That’s why I made the song, ‘Tipping Point,’ that I released, was because I had to struggle with whether or not I wanted to go that route and it became easier and easier the more I refused or turned down offers to do that, it became easier for me because I’d wake up the next day and still feel good. That was important, so I didn’t really have to go that route. It might have been a good shortcut for me or for most people, but you know, my longevity is key.“, Bone explained in an interview with Redbull Music Academy.

3. He is an undisputed vinyl master and a very successful producer.

DJ Bone is one of the most technically skilled DJs on vinyl, while all fans of analogue records will recognise the uniqueness and weight of his performances using three turntables. From selection and mixing to playing with the fader, scratching and back spinning, he masterfully uses every technique and incorporates each flawlessly into his sets, justifying the inevitable prefix “DJ” in his stage name. The lack of electronic music to match his eclectic, funky style and affinities has led him to produce original songs, in which he again proved very successful. He started releasing his own music in 1996 with the EP “Electronic Birth“. Since then, he has been actively releasing singles, EPs and mixes, while his full-length album debut, “Out of Knowhere“, came out in 2007. However, he likes to emphasise that he is a DJ above all, and he carries that title in its purest form. He spins records for his own pleasure as much as for the satisfaction of the audience, and that’s an impulse carried only by those who live for what they do.

4. He focuses on a purely auditory experience.

DJ Bone is not a fan of hype, lasers, high production value, effects, and stage spectacle but highlights a purely auditory experience. Each of his performances is a unique musical journey in which he tries to expand the minds and move the bodies of organic Detroit techno fans.
“If the gig is set-up with the music as the main focus (as it should be), then I have total control over the vibe. That’s my duty. I’m not worried about having a Hollywood production going on or special effects with video images, smoke, etc. Just playing the best possible music as well as I can,“ Resident Advisor reports.

5. DJ Bone is a true champion of the underground.

Since his first appearance on the Detroit scene, DJ Bone has established his position as a true underground champion. In 1998, he already opened his own publishing house, thus retaining complete creative control and establishing his status as a fully independent artist. For him, the underground means being able to do what you enjoy, rather than being forced to do anything. Bone takes the promotion of “underground music” to a new level with his radio show “Further“ and the “DJ Bone & Friends“ series of parties gathering less well-known but just as talented DJs and producers.

“The majority of promoters now base who they book solely on the popularity and amount of followers a DJ has. Talent has been pushed so far down the requirement list that it’s about to fall off. This is another reason I’m doing my DJ Bone & Friends nights. To instil confidence in the people paying to dance at gigs. That they get to hear and see some talented DJs and not just a popular, trendy name-of-the-moment figure,“ Bone explained in an interview with the London portal Fabric.

Tickets are available on the No Sleep Festival website and via Gigs Tix, both online and at physical sales locations.